The embargo is still in effect on any reviews of the movie, but here’s the full scoop on the World Premiere last night of Legend of Tarzan at the Dolby Theater in Hollywood.   It was a treat on many levels for everyone in our “ERB group” — which included three from the Burroughs family  (Linda, Dejah, and Llana Jane Burroughs), three from ERB Inc. (Jim Sullos, Cathy Wilbanks, and Janet Mann Wilbanks), and yours truly . . . .here it is, live blog style:

4:40PM — All right, I know this is pretty early, but traffic can be terrible down there and I didn’t want to stress out, so here I am.  Premiere is at the Dolby Theater, which used to be the Kodak Theater — same place they do the Oscars. My invitation says I can park underneath the theater at the Hollywood and Highland complex and it works out just fine. It’s crazy hot, though, as soon as i get out of the car.  And I’m doing the full wool suit thing.   Up the escalators and out in front — snap a couple of pix

5:30:  Standing at Will Call with Jim Sullos, Cathy Wilbanks, and Janet Mann waiting to get our tickets.  Nice lady named Stephanie in line behind me – she won her tickets from a radio sweepstakes in St. Louis.  Also the mysteriously charming “Marla”, who is chatting with everyone in line and asking who we are, but won’t tell us who she is, other than she’s there with the Weintraub group. Finally Will Call opens and I get my tickets.   Sweet.

5:50 PM — We’re back out front now checking out the crowd and taking some pictures. Linda, Llana Jane, and Dejah are with us now. High spirits all around.

6:20PM — okay, enough of the milling around n the heat outside. The cool interior of the theater beckons. Dolby Theater is huge — 3,400 seats.  My seat is pretty much all I could ask for — just off the aisle right near the middle in what appears to be the primo section.  I had  expected to be in some sort of blogger’s bullpen way up in the cheap seats but that’s not the case — I’m in what appears to be a pretty small batch of guests of David Yates just across the aisle  from the center.  Crowd just starting to file in.  Nice. And oh, so this is where they do the Oscars.

7:30 PM — David Yates and David Barron come out and introduce the cast and the film. All of the main cast are here — Skarsgard, Robbie, Jackson, Waltz, and Hounsou.  Nice.  Here we go. . . .

I can’t comment on the film itself until tomorrow — but I can talk about the audience.  It’s what I’m used to doing at my (admittedly a lot less grand) movie premieres anyway  — how is the audience reacting?  Do they get restless at any point? Are they laughing where they are supposed to laugh? Is there “rapt attntion” …?   Answers to all these questions are favorable — the audience is with the story all the way.  Can’t read too much into this, as a premiere audience with the filmmakers and stars in attendance is a very friendly audience. But believe me, they can get restless if they don’t like what they’re seeing. You can feel it.  In this case, what I’m feeling is all favorable, and my antennae are definitely out, looking for any sign that they aren’t buying it.

At the end — sustained enthusiastic applause and quite a few cheers.  Absolutely genuine enthusiasm. A nice reaction at the end of a premiere doesn’t prove we’ve got a winner …. that remains to be seen.  But it’s an important step in the process and when the enthusiasm isn’t genuine, you can tell.  This enthusiasm is for real.

9:40 PM — I slip out quickly into the lobby and check out the buzz there and in the long lines that are forming for the bathrooms.  It’s very good.  The general takeaway is that the film has exceeded expectations and people are genuinely enthusiastic.  I count more than 20 positive comments — nothing negative.   Some of the other members of our group are talking about how much better the atmosphere and reaction is tonight, in comparison to the way it was for the John Carter premiere (which I did not attend.)….

9:50 PM — the place has almost emptied out when Alexander Skarsgard comes out and just outside the entrance to the theater he is taking pictures with fans. He’s tall — I know they say he’s 6’4″ but I’m 6’5″ and I’m pretty sure we’re eyeball to eyeball.  It’s been a long day for him — started on the morning TV shows in New York and is ending here on the red carpet in Los Angeles.  We maneuver them into position and they introduce themselves as the great granddaughters of Edgar Rice Burroughs — and Skarsgard’s reaction is very nice. He seems genuinely excited by it and takes the lead in organizing some pictures.  Can’t help but be impressed. 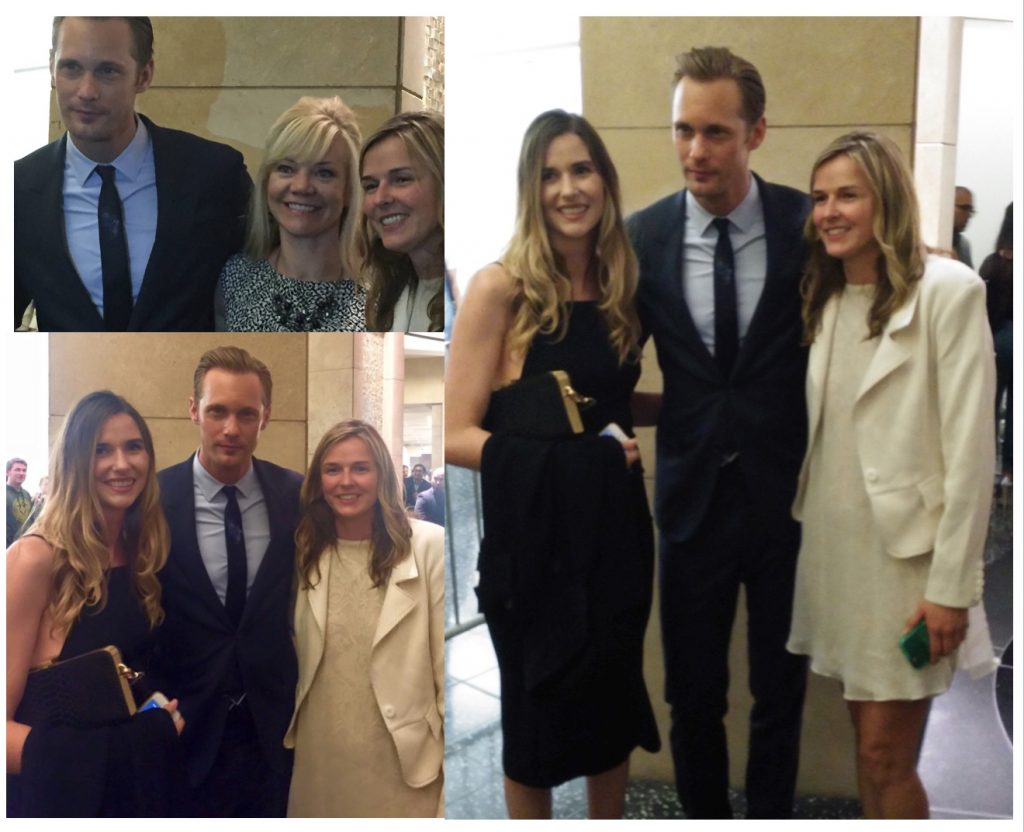 10:00 PM:  On to the afterparty, which is at the Roosevelt a block away from the theater.  Spirits are high all around. Cathy Wilbanks is a mingler extraordinaire, and she leads the way. Everyone is there — Skarsgard, Robbie, Jackson, Waltz.  After and hour I still haven’t seen David Yates and I do want to reach out and thank him for including me — so with Cathy running interference we make the rounds and there he is.  Cathy leads the intros and to my great delight, David gives me a big bear hug and has great things to say about The Tarzan Files . . . we chat for a few minutes and then Margot Robbie comes over to talk to David, so we get the pleasure of meeting her too . . . .that’s it — mission accomplished.  It’s been a great night, time to go home.