A review of a recent science-fiction video game included the following comment about a classic novel that we’re into around here. 😉  (Thank you, Scott Tracy Griffin, for sharing your discovery of this comment with the ERB fans on Facebook!)

“It reminds me a lot of John Carter. The original novel series, A Princess of Mars in particular, has had a great deal of influence in modern sci-fi. James Cameron’s Avatar sought influence from it as did the original Flash Gordon serials that would later become the backbone of the Star Wars universe. So many well-known properties ripped their material from Edgar Rice Burroughs that by the time A Princess of Mars received its own feature film adaptation, 2012’s John Carter, there was nothing left for it to dazzle audiences with because we’d already seen everything it had.”

When I hear from those who think that the John Carter source material has been strip-mined, part of me groans. Another part of me smiles knowingly. On one hand, that negative impression may dampen enthusiasm for the property going forward. If people think John Carter is played out, who will want to pursue adaptations of the work in any other creative medium? But their pessimistic impression also sets the stage for the revelation of a big and wonderful secret. The world has yet to see John Carter and Barsoom themselves on the cinema screen. The Disney film was an enjoyable, well-intentioned, and flawed effort – an assessment which I detailed in an article for ERBzine in 2013. http://www.erbzine.com/mag43/4399.html

Andrew Stanton’s film mined perhaps one third of the potential of a Barsoom film on screen.

Many storytellers have been influenced by ERB, but none of them has been ERB himself. His talent was unique in human history. It was neither a precise nor properly “literary” talent, and was never fully tamed nor harnessed. And for that, those who appreciate ERB should be forever grateful. He didn’t write for the purpose of receiving accolades from academia. He wrote to gather us close around a campfire that has burned for millenia, to lead us deep into an untouched wilderness, and to take us on an adventure that brings us to life.

The instincts of exploration and survival drove him, and draw us along after him. The raw vitality of the human spirit is, in ERB, refined by gentlemanly character, love, and sacrificial courage. In his stories, our insatiable need to imagine and create is lavishly expressed in worlds brimming over with ideals which remind us how our inner fires can be channeled to serve and to build, rather than destroy. Burroughs taught some of the oldest lessons there are, and made them entertaining in an incomparable way.

He chose the tools of the ancient poets and myth-crafters, and by them fashioned visions of the future, of alternate pasts, and of other worlds infused with vitality from beyond our reality. We read Burroughs as a way to step into the dreams and aspirations of hundreds of generations of our fathers, to hear the tales that fueled their noble passions, to remove the time between us and listen at their knees once again. ERB isn’t the only storyteller who has done this, though he is among the most prolific to undertake it. In terms of legacy and influence, one of his closest brothers is J.R.R. Tolkien, author of “The Lord of the Rings,” a long-beloved novel that has taken popular culture by storm, especially since the excellent film adaptations of LOTR were released starting in 2001. Both men delved deeply into classic myths for inspiration and crafted fictional incarnations of archetypes which do not age. Tolkien specialized in the depth and details of history, culture and language, while ERB specialized in the breadth and momentum of wild imagination, adventure and romance. 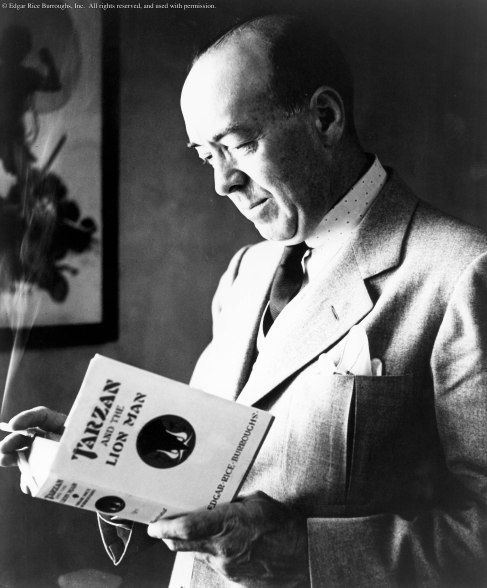 Technological advances in the art of filmmaking have allowed many admirers and borrowers of ERB to flourish in recent decades. It has finally been possible to put his extraordinary imagination on screen. We have seen fully-realized worlds and cinematic universes which incorporate elements original to ERB. It could be said that the fruit hasn’t fallen far from the tree, but there has in fact been very little plant-like replication. Thor’s Asgard is a lot like Helium, but floats alone in space. Jabba’s sail barge shares much in common with a Barsoomian airship, but has only a cameo role in one of many films. The animals in “Avatar” can be controlled by telepathy, yet the planet Pandora is distinct from (most of) Barsoom.

The pattern of ERB’s influence has been less like fruit that has fallen from a tree and grown to produce the exact same fruit, and more like fires that have spread independently after a bolt of lightning. The fires have been bright, and have burned hot in our culture, though none has been the bolt itself. None has explained how and where the fires started burning along their current courses. Ironically, Disney’s John Carter was in many ways influenced more by sources which borrowed from ERB than it was by the John Carter source material itself. It was more of a loop than a revelation of origin. This observation isn’t meant to disparage Stanton’s film, but rather to point out how even it did not strip-mine the impact of ERB’s Barsoom in the public consciousness.

Borrowed elements spread throughout hundreds of influenced works over the course of a century does not equal the original work itself. This principle was proven, beautifully, by the unmatched cinematic success of the Lord of the Rings films. When “Fellowship of the Ring” was released in 2001, Tolkien had already “owned” the status of founder of the modern fantasy genre for sixty years. Middle-earth had been the single strongest influence on other works of fantasy over the course of that entire time period. No doubt, in the minds of some observers, Middle-earth had been strip-mined by Star Wars, Willow, Harry Potter, and innumerable other sword-and-sorcery stories over the intervening decades.

And then people went to see a genuine-article film adaptation in December, 2001, and the cultural zeitgeist was wonderfully upended. The original master of modern fantasy had entered the arena in greater strength than any who had followed after him. The films weren’t made from a spirit of competition, but their mere existence and excellent artistry was nonetheless a powerful reminder to give credit where it was due. Tolkien’s work became a fountain of inspiration and purpose for millions of people around the world. Providentially, it served as a healing reassurance to a world that had only months before been rattled and wounded by the events of 9/11.

One of the great strengths of works rooted in timeless themes, such as the works of ERB and Tolkien, is that they are always timely, often in a predictive sense. They are timely to the foundational stuff that makes humans tick. They are remedies on hand, organically postured to meet the needs of souls in the face of life’s greatest challenges, in both traumatic moments and the daily grind. They don’t chase symptoms the way trendy stories often do, but rather, due to an understanding of human nature, predict problems and are available to address root causes. That aspect of storytelling cannot be strip-mined, and never feels tired. That edifying and healing quality is a primary draw of storytelling in the first place, and the wild and gentlemanly writings of ERB have it abundantly. We may be familiar with ERB’s style, and may have already seen elements of how he told his stories in many other works, but we have not yet seen his unique alchemy – his fingerprint synthesis of elements. Most importantly, despite much of popular culture giving us an education in how ERB told imaginative adventure stories, we will forever hunger for what he had to say.

In the public consciousness, the fires of science fiction and superheroes have yet to be traced back to the foremost place of their kindling. The lighting bolt itself, brightest and hottest on this particular landscape, has yet to be seen.

One thought on “Returning to the Source”